To recap, on the most recent Questions: We Don’t Have Answers, Donovan and I threw together a mess of topics and spoke to them as if we were clear on the throughline. We began with James Gunn’s unfortunate firing by Disney off of Guardians of the Galaxy Vol. 3, for which it was safe to assume he’d return to direct, we brought in the Arenanet scandal — another unfortunate firing, to say the least — and then considered Chloe Dykstra and the unfortunate non-firing of the talking dead himself, Chris Hardwick. But one case is clear cut and another raises issues that have been swirling around in Donovan’s head for a while (the shape of outrage), and were new and infuriating to me (this “but what you didn’t know, was James Gunn is good” that seemed to come out of nowhere).

We’ve both independently continued to think about this and will get together for a more indepth follow-up. But for now, I want to address a hanging thread from that episode in the form of an outline on “man’s redemption.” This is something I think all men have to confront. The fallacy driving my perspective on the episode was that somehow I was different than Chris Hardwick or James Gunn, when that’s never been the case, and I’ve felt that way since before Roger Ailes, since before Elliot Rodger. Men are individuals but they are also part of something larger, part of a share of beliefs and biases propagated by what we think of as “the patriarchy,” and I find that shorthand helpful. There are shades of men like that in me, where I’ve had resentful or presumptive thoughts, but I stopped short of acting on them. Surely, I say, that means I’ll never act on them. And that’s the kind of hypocrisy I criticize in other men.

At some point, people socialized as “American men” will commit violence against women (not exclusively, of course), and this violence may be visible atrocities we collectively stand against as a society, like murder, or they may be invisible, deniable atrocities like date rape. I’m not interested in weighing one of these against the other, but rather in theorizing that they all come from the same place, and identifying that source to prevent the whole of it. That sort of work is ongoing, I might figure, and that’s exactly my reticence to jump onboard with  redemption narratives.

What worried me in part about the insistence that James Gunn was working on himself was it seemed to absolve his past shittiness. And how could it not, when that’s everything on the board? In order to fight back against the alt-right’s hypocritical strategy, his shittiness needed to have been erased. My entire issue is that I don’t want a man’s prospective redemption to allow a first-time shittiness, a triggering joke, a catcall, an inappropriate advance or touch. Not in this world, where we side with men as a default because they make the things we like, and we like these men, because there is no one else to like.

So the question raised that’s better than any I summoned on the episode is this: how do we measure the actions men can take to balance their violence against women with whatever’s the opposite of violence — support, healing, solidarity, allyship (three of four of those are the same fucking thing. I don’t even know!)?

I saw a tweet that functionally said: “I hope people don’t judge me for things I said years ago, especially since I existed online then and there’s a record.” What kind of world does this create? Who are we men to say we stopped being the guy we used to be, seeing as we only realize past shittiness with perspective? I believe it’s judgment, whether actual or psychically perceived, that’s guided my betterment. Even the thought of “What will [Woman X] think if I post this?” has been incredibly powerful. It inhibits “my true self,” sure, but recognizing that “my true self” doesn’t need to be seen and heard 24/7, occupying maximum space, is pushing against what the patriarchy conditioned in me.

I wanted to engage with that person but decided to just shout laterally:

Absolutely judge me for things I’ve said in the past as they’ve hopefully informed who I am today. Don’t be an alt-right hypocritical fuck who weaponizes corporate cowardice against me

Yes, judge me for the things I’ve said and done in the past, but grant me those things exist in context, and connect them to what I say and do now. So what’s come out of this ‘conversation’ is that second part, asking you to make that connection. This is what forgiveness may look like, and asking forgiveness is what every man in a patriarchy begins at. Because again, we’ve all done something wrong, and believing otherwise, that even having a past to reflect on is a blank self-improvement check is ignorant. Let’s continue to self-improve, not pretend we’re done, like the little kid at the dinner table who wants to go play video games.

Before, I was only interested in retribution. And yet, I’ve always been a proponent that we all have to live on this world — literally killing the enemy would leave a lot of Nazis dead, but also a lot of fathers and brothers and neighbors and me. More realistic to talk, which is, I understand, a centrist dog-whistle, but I also think most of us have yet to sit down and figure out what that conversation looks like. Ideally, it’s less New York Times op-ed and more the story of Derek Black. For this instance of men failing upward on the backs of abuse victims, there’s an exchange: if you can forgive my past by understanding I exist as past and present, I will learn from that past to earn your forgiveness.

So this is where the measure comes in: on that “learning from the past.” Did Daniel Tosh take from that experience and work to educate himself about sexual assault? Did he use his platform to educate others? When an instinct kicks in, when that share of values and biases knocks on his door to make another joke like that, does he also think about a specific woman he cares about, and her own history with real sexual assault? It’s not for me to judge whether or not James Gunn did the work our fictional Daniel Tosh did here. Granted, I suspect that’s only because I haven’t seen Guardians of the Galaxy Vol. 2.

But this is my strong feeling nonetheless, that James Gunn created a movie which touched people’s hearts. He is an artist with a valuable ability to do that. Not to draw an equivalency, but people have also been affected by the works of Woody Allen. What I mean to say is that there are two James Gunns: the shitty Twitter James Gunn who pushes Nicole Perlman out of Guardians of the Galaxy, and James Gunn the affecting artist. The latter doesn’t automatically negate the former, but there’s nothing stopping him from answering directly. Do as Tosh did, James, through your own language, addressing your own past, and this I ask of all men, myself included.

Wow, what an example, that Tosh. Great guy.

And so, the reason I stressed that all men are complicit in, you know, the state of gender relations, is because throughout this conversation, I’ve been thinking about myself and my future. One day, fingers crossed, I’ll have a platform, I’ll be a public figure. I don’t want my beliefs to change when that happens. I want to be held to a reasonable standard, I want to be suspected by default because I may not know if I’m hurting somebody. How will I know unless a third party is allowed to speak?

And I definitely spoke about James Gunn with anger directed at Chris Hardwick, but also with a keen interest in negotiating the standard for how we view men in power, and all men (who all have power). So part of the confusion on that episode was my trying to transform the conversation into something else. I’d prefer if James Gunn directed the last movie, only because of the alt-right thing. Earlier, I’d wish he never directed any of them, because I hated him in an undefined way.

Actually, I’ve pulled a lot of names into this post, and it’s definitely got me anxious. I could be completely off-base about everything here, but I know I’m right about this: I never want to feel comfortable living in the world as it exists. I don’t want to be complacent in my level of self-improvement, so any talk of establishing a pathway for men’s redemption takes me completely off-guard. Men are shit and will be shit unless intervened upon. Don’t give them a fucking inch, unless — and only unless — the alt-right and a corporate conglomerate do the Predator arm meme. 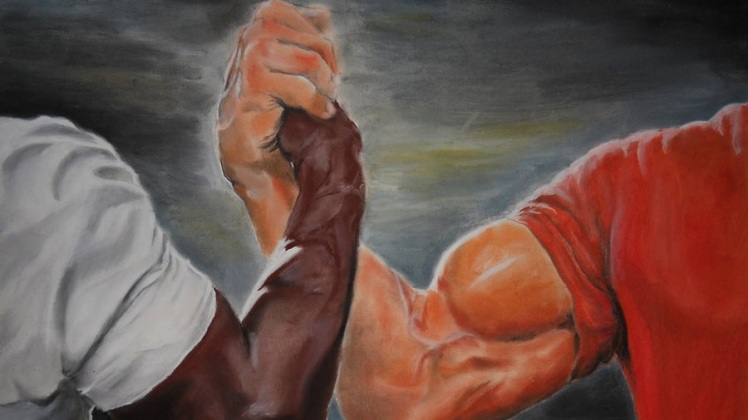 As a final, final note on my end, “The Shape of Outrage” is a play off the first book written about David Cronenberg movies The Shape of Rage, which itself may come from dialogue in The Brood. I wouldn’t know, yet. If there was any chance it could be confused for a play off “The Shape of Water,” ugh, that’s horrible. If making puns is a sin, what’s making puns that don’t even work?

I was agitated by this James Gunn thing first because it seemed to run opposite to the conversation five years ago with offensive comedians. No matter how legitimate I think that is, no matter how much I adhere to “believe women,” understand that “trigger” means PTSD, it’s still pattern recognition. Is anybody else seeing this inconsistency? Huh? Is anyone else smart like me? So what’s my stake in this fight? At least a part of it is being proven right.

I am a piece of shit, and knowing that isn’t enough.